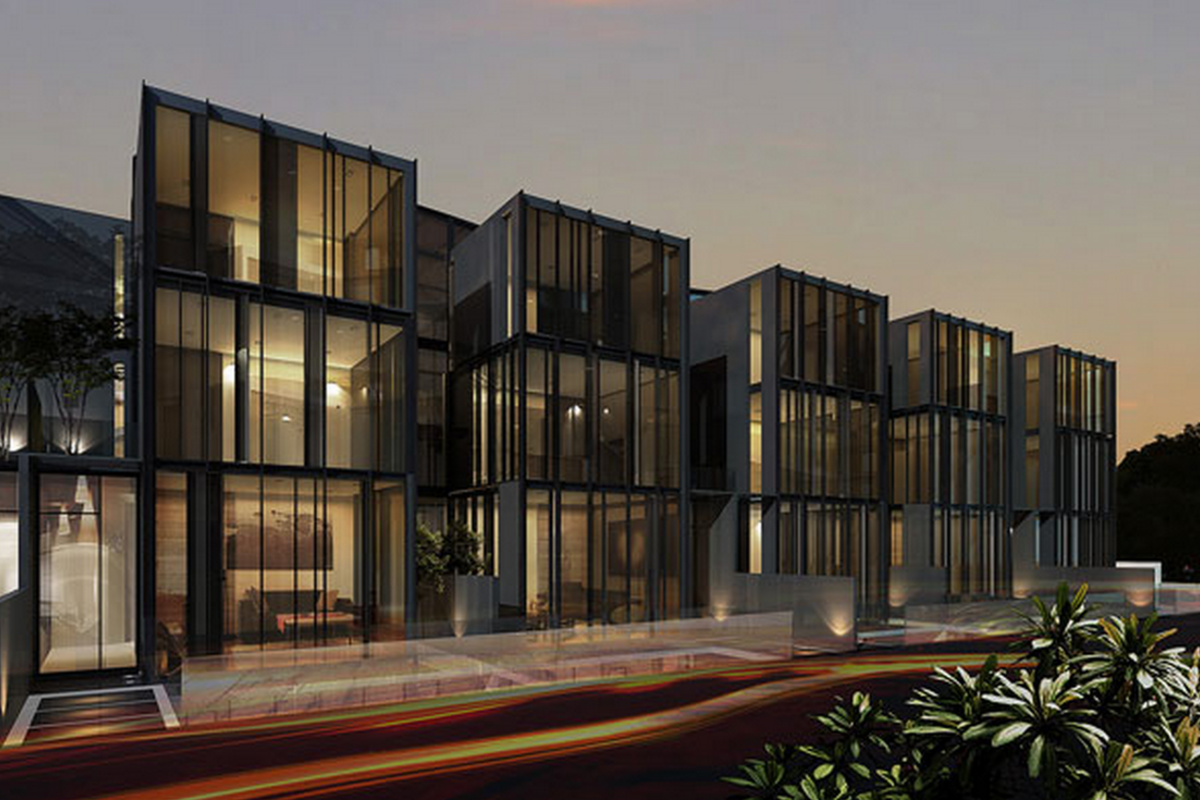 (i) the late delivery of vacant possession of the property (hereafter ‘the first claim’), and

(ii) the late delivery of the common facilities serving the housing development where the plaintiff’s property is situated (hereafter ‘the second claim’).

“25 Time for delivery of vacant possession

(1) Vacant possession of the said Parcel shall be delivered to the Purchaser in the manner stipulated in clause 26 within thirty-six (36) calendar months from the date of this Agreement.

(3) For the avoidance of doubt, any cause of action to claim liquidated damages by the Purchaser under this clause shall accrue on the date the Purchaser takes vacant possession of the said Parcel.”

(2) If the Vendor fails to complete the common facilities in time the Vendor shall pay immediately to the Purchaser liquidated damages to be calculated from day to day at the rate of ten per centum (10%) per annum of the last twenty per centum (20%) of the purchase price.

(3) For the avoidance of doubt, any cause of action to claim liquidated damages by the Purchaser under this clause shall accrue on the date the Vendor completes the common facilities.” 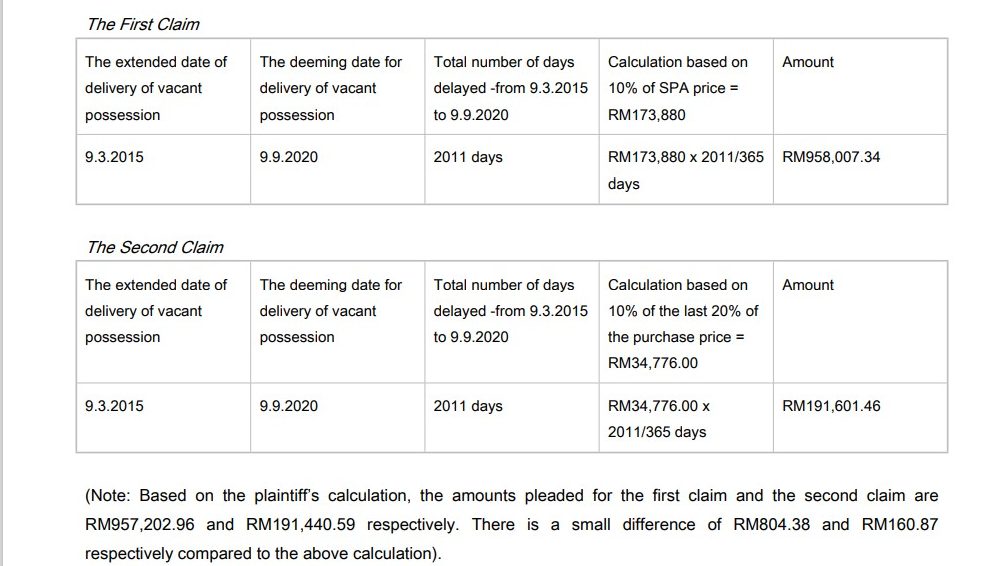 The Findings of this Court

(i) the plaintiff did not have locus standi to bring this claim,

(ii) with regard to the plaintiff’s second claim, the defendant disputed the date of delivery of common facilities was on 9.9.2020, and

(iii) the computation of liquidated damages by the plaintiff has disregarded section 35 of the Temporary Measures For Reducing The Impact of Coronavirus Disease 2019 (COVID-19) Act 2020 (hereafter ‘the Covid19 Act’).

This Court will deal with the defendant’s contentions in seriatim as below.

“(3) Any absolute assignment, by writing, under the hand of the assignor, not purporting to be by way of charge only, of any debt or other legal chose in action, of which express notice in writing has been given to the debtor, trustee or other person from whom the assignor would have been entitled to receive or claim the debt or chose in action, shall be, and be deemed to have been, effectual in law, subject to all equities which would have been entitled to priority over the right of the assignee under the law as it existed in the State before the date of the coming into force of this Act, to pass and transfer the legal right to the debt or chose in action, from the date of the notice, and all legal and other remedies for the same, and the power to give a good discharge for the same, without the concurrence of the assignor”.

“At common law and under the relevant rules of equity, the said loan agreement would amount to an equitable mortgage because the assignment of the right, title and interest in the said land was expressly or obviously for the purpose of securing the loan given to the borrower to purchase the said land. The said loan agreement is not an out-and-out purchase of the said land. This view is reinforced by the promise that when the document of title of the said land was available after the completion of the subdivision aforesaid, the borrower would execute a charge in favour of the lender according to the provisions of the National Land Code 1965 (‘the NLC’). It is true that nowhere in the said loan agreement has the word ‘mortgage’ been used, but it is a security transaction in connection with the loan given by the lender with a provision for repayment, after which, the borrower ‘shall be entitled … to obtain a discharge and release of the said lot from the lender’… Thus, we have the loan, the contractual right to repay or redeem the said land and the assignment of all ‘right, title and interest’ in the said land pending the exercise of such contractual right to redeem. The said loan agreement, therefore, at common law, will be a mortgage. It would be an equitable mortgage (and not a legal mortgage) because the borrower at the time of signing the said loan agreement had no legal estate (or registered proprietorship of a grant of land) but only an equitable interest as a purchaser by contract from a housing developer, pending the issuance of a separate document of title aforesaid. In other words, it is a mortgage in equity for which the actual form of words is immaterial, provided the meaning is plain when interpreting a document as a mortgage or equitable mortgage; ….”

“[35] We have no quarrel with the above principle of interpretation of a legal document (referring to cases Nouvau Mont Dor (M) Sdn Bhd, Hipparion (M) Sdn Bhd and Philioallied Bank (M) Bhd). However, where there are contemporaneous documents executed with the DOAs such as the Loan Agreements and the DOAs do make specific reference to the Loan Agreements executed, then the parties are entitled to refer to both the documents to clarify the intention of the parties should any doubt arise. It stands to reason that one document cannot be interpreted in isolation of the other for if that had been the intention of the parties then there should be no reference to all to the other document.”

“Notwithstanding anything contained in any written law or any rule of law, agreement, assignment or charge lawfully entered into between a homebuyer as defined in section 16A and his financier, a homebuyer shall be entitled on his own volition and in his own name to initiate, commence, institute and maintain in any court or tribunal any action, suit or proceeding against a housing developer or any other person in respect of any matter arising out of the sale and purchase agreement entered into between the homebuyer and the housing developer provided the homebuyer’s financier under a deed of absolute assignment is notified in writing either before or within fourteen days after the action, suit or proceeding against the housing developer has been filed before any court or tribunal.”

The date of delivery or completion of common facilities

The application of section 35 of the Covid19 Act

“(1) Notwithstanding any agreement entered into between the purchaser and the developer, the period from 18 March 2020 to 31 August 2020 shall be excluded from the calculation of-

(a) the time for delivery of vacant possession of a housing accommodation; and

(b) the liquidated damages for the failure of the developer to deliver vacant possession of a housing accommodation.

(2) The developer may apply to the Minister for an extension of the period referred to in subsection (1).

(3) Upon considering the application under subsection (2), the Minister may, if the Minister is satisfied that additional time is required by the developer to deliver vacant possession, by written direction grant to the developer an extension period of up to 31 December 2020 to deliver vacant possession and such extension shall have the same effect as the period excluded in subsection (1).